We Killed the Goat in Izbişte

Ambling in Amiens, The “Venice” of France 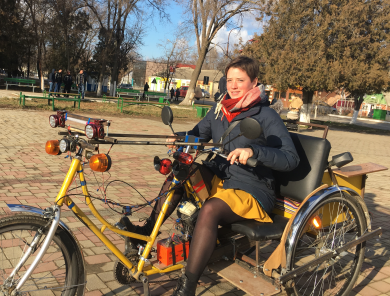 Haley Bader grew up on a small farm in Madison County, Virginia, nestled in the Appalachian Mountains. She resisted the traditional demand of footwear (smelly feet and enforced baking-soda bombs are a sour combination in any child’s sneakers) to take barefoot romps in the woods. Her formative years were punctuated with forced marches in the Blue Ridge (yes, she whined the whole way), turns at the cider press (why use the apples from the ground?? They’re rotten!), dunks in the frigid waters of the Rapidan River and hours of countryside solitude made bearable by book binges.

These experiences left her with a taste for harebrained adventure and a penchant for literary escapism.

To “get away from it all,” Haley attended Bard College in New York (a sweet 8 hours from her homestead), a small liberal arts institution on the banks of the Hudson River. Besides unintentional titty-gazing at Bard’s topless sunbathers, she studied Russian & Eurasian Studies and Asian Studies with a focus on the Russian and Japanese languages. For her senior thesis, she described the bride-kidnapping phenomenon in Kyrgyzstan  as well as the role of NGOs and NPOs in Central Asian women’s organizations. During her studies, she also worked with the children of several families as a caretaker, tutor and “mentor.” She graduated in May 2013.

After taking a year off to explore life in the culinary industry, Haley began volunteering as an Americorps VISTA. Her background working with children and her desire to learn more about NPOs led her to team up with Space of Her Own and Space of His Own (SOHO), one-on-one creative mentoring programs that incorporate the arts to support 5th-grade at-risk youth.

Following Americorps, Haley worked for 6 months as a Youth Service Coordinator at the Alexandria Court Service Unit, a partner of SOHO. Haley taught youth on probation, as well as youth diverted from court proceedings, life skills.

In summer 2015, she applied for Peace Corps and was accepted that fall. Beginning in May 2016, she began her voluntary service and was assigned to work as a Community and Organizational Development Volunteer with the “Miras-Moldova” Public Association in Comrat, Gagauzia, Moldova. Her main tasks were building organizational capacity, cultural reporting, recruiting local volunteers and developing/co-coordinating a Journalism Mentoring Program for local youth. Beyond forging great friendships and cooking (a lot), she kind of wrote, sometimes.

Her passions lie in the Russian and French languages, writing and the arts. She still dearly loves to read.

Welcome to Sundry Travels. My name is Haley, and this site is a collection of my creative works, ranging from records of Peace Corps volunteer years, travel blog posts, short stories and poetry to videos, photography and art. This site also catalogs the culture, food, beauty and (mis)adventures that one can experience at home or abroad. If you like what you see, please share!