Life on my “small farm” is at times serene, at other times hurried, but observably varies by the season. Today I watched, for the first time, a mother hen hovering over her young. One chick had ducked under its mother’s breast, and from across the yard a quick procession followed suit. I was surprised that so many chicklets – 12 at least – could not only somehow signal at such a distance that it was time to roost, but also fit themselves so neatly in their mother’s plumage. And so many young animals! I caught my host mother Nadea doing chores in the front yard yesterday with two ducklings in her pocket. 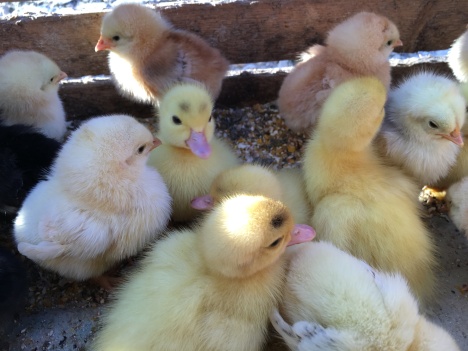 It seems as though every house in this town is a “small farm” equipped with at least a few fowl and a vegetable garden – all of my fellow Peace Corps volunteers from the Community and Organizational Development program have these at their homes. And the fruits of local labor are always evident in Moldovan generosity. Yesterday after technical classes, our host families came to the school to celebrate our arrival and brought homemade treats for us, potluck-style. Food included fresh cherries (this Sunday is our village’s cherry festival), pancakes made with cabbage, various pastries filled with potato, cheese, apple and pumpkin, fried zucchini, small dense cherry muffins and more.

Before our feast the Mayor of our village had introduced himself to our group, and the rest of us followed. The woman who organized the event could only be described as loquacious – she heaped praise on her village, on us, and could not stop extending her welcome. My host mother Nadea in particular impressed me; when it came to her turn to speak, she eloquently stated her appreciation for cultural exchange and her desire for us to learn from each other. One comment took me by surprise: “Though we speak different languages, we are all the same.” Although one of my main roles as a Peace Corps volunteer is to serve as an ambassador of the United States, I feel like I have come under the wing of a practiced Moldovan envoy. Nadea is quick, thoughtful and funny – when I explained that I grew out my boy-cut hair to help me assimilate in Moldova, she chortled: “Did you think you would be deported?” 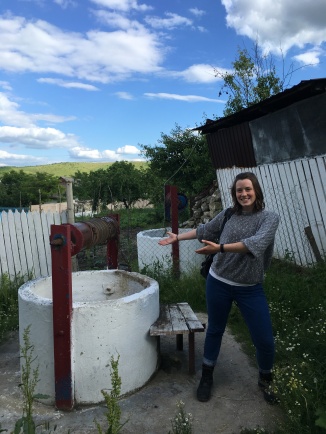 One of my fellow volunteers observed my host mother flitting around the group that evening, and stated that she seemed like the “soccer mom” of the bunch. And she continues to impress me. When I arrived home this evening after an expedition throughout the village with a few of my fellow volunteers, Nadea was tilling the soil in front of the garden wall to prepare it for a flower bed. She greeted me as I approached and told me (Nadea never asks, she always tells) to go to the kitchen so I could eat. She followed me momentarily, and at the table we briefly discussed her day. Nadea was tired; her daughters were home most of the day, but had not done their chores. Her work day was long, and she was overwhelmed by the number of patients who had come through her clinic. I offered to help with chores, and after dinner she sent me with my sister Livia to pull water from the well at the top of the hill above our house.

In our technical training today, the COD director commented that she is always overwhelmingly impressed by the work and stamina of Moldovan women. She posted a schedule of a regular weekday in a Moldovan woman’s life, which begins at 5:00 am with chores, followed by child-rearing, salaried work at the mayor’s office, a two-hour lunch break, back to the job, more chores at home, washing and feeding her children and yet more domestic tasks ending at 11:00 pm. I’ve heard rumors that women are the lifeblood of the villages: since many residents work abroad, the women run the show at home. I’ve certainly observed this in my host mother, who is not only gracious and at times flamboyantly dramatic, but is also affectionate with her children and always on the go.

Tonight, after I returned from a walk with my host sister (we wandered to the front of the village together, where we were invited to explore a new attraction, or “rest house,” that some of the locals are building… my Russian is coming in handy!), Nadea was still cooking for the family. I sat down at 10:30 pm to help cut cucumbers and Nadea, though obviously exhausted from her long day, laughed with us while we ate her salad and drank small glasses of beer.

2 thoughts on “My Home, My Host Mother”