As he traced that heart in the air with two fingers, I knew… love had struck… again.

Or perhaps not. Here, where time flows and contracts like the accordion song of a Comrat native (never mind the occasional wheeze), a few busy weeks can marinate a day’s experience. Some memories stare back, more assertive than others; conversation ensues, and humorous reflection, and our common experiences distill a slick truth.

I spent a September Sunday with a few of my colleagues in the village of Gaydar, a rural community a half hour from Comrat. We boarded a marshrutka (one of the local modes of transport – a mini-bus, only cents for a ride) for the first leg of our journey. It was one of those warm days when too many people packed into the small cab and, sweating, passengers (at least, we volunteers!) hoped for a whiff of fresh air from the life-giving roof-hatch (and waited, tensely, for the moment a local babushka would insist it be closed – didn’t you know the sweet current brings not simply relief, but also sickness? This local wife’s-law spoils the travels of many a volunteer – the current, that passive grim reaper, must be stopped!) 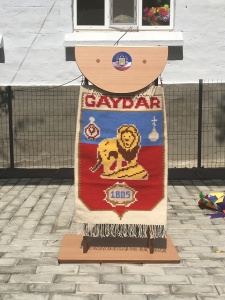 And then the bus choked, the standing passengers collided, and the driver pulled off to the right. One of the rear tires, likely tired from her frequent outings, had given in to the road’s rough caress. We squatted in the grass and shared artwork and articles on our smartphones as the driver urged a new wheel onto the naked axel. A quick snap with my phone’s camera was enough to elicit a different sort of snap from the driver – no paparazzi, please!

We boarded once again, then disembarked caddy-corner to one of Moldova’s typical side-show wells, housed in a small sanctuary flanked by Orthodox icons. The saintly mosaics don’t just evoke a sense of purity, they suggest the cleanliness of the water – a boon, considering the many local waterways plagued by Giardia and Hepatitis. 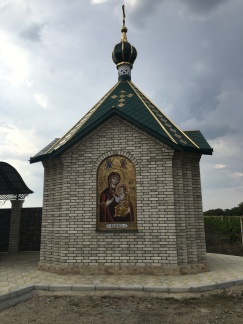 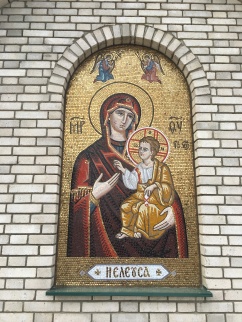 A flat hand and the flash of our Spanish volunteer’s warm smile caught the attention of a cruising local who gave us a lift the rest of the way to Gaydar.

The same Spaniard had been to the same village with the same colleagues a few weeks before to report on the opening of an Afghan veterans’ war memorial. And lo, we attracted not just the village’s mayor and a free meal, but our “new” best-friend, a mute man with a big smile, a cheeky grunt and a penchant for squeezing ladies’ shoulders. I couldn’t have anticipated my low-level Russian being such an advantage: the need to mime nearly every complex thought for months at the start of my stay helped me develop the skill to have and open, honest, wordless conversation of gestures and facial slurs. I discovered LOVE, communicated through a finger-traced heart, air-guitar-style. 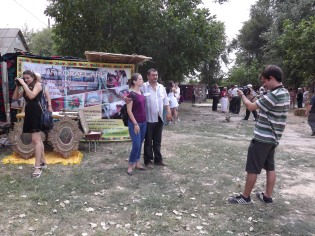 Our new guide, best-friend, boy-friend! led us round the village. On the way to the bathroom, I spied a rural cliché: outdoor relief, with only a minor twist – assistance, in full sight! Bare ass to the ground, the young girl shamelessly went, her friend holding her long shirt like a college girl would hold her friend’s hair on a night of too much adventure. I do suppose that the squat toilets, with walls graced by the phrase – Шлюхи сюда! – is enough to discourage not only foreigners, but locals as well.

Did I mention the chivalrous rescue by our French volunteer that eased my afternoon? After the incident at the toilet, my best-friend followed me throughout the labyrinth of rugs, seeking a series of pictures. Was it love? I agreed, time and again, to a pose and a smi(rk)le. Eventually, I intuited that my champion was… more of an interloper. The Frenchman (aptly named Cosma – a little universal aid?) interceded, snapped a shot and sneaked away with me (ah, the French way).

I wandered. Potential purchase, foiled – the rug was an antique, a treasure, unearthed from a babushka’s attic and a central prize of a Gagauz museum. We sat, we beer-ed, we mingled. And then, the final acts!

As officials in some towns do, Gaydar’s very important persons awarded prizes to People of Merited Prestige. Several couples were recognized for the longevity of their marriage (50 years strong for the “winners”). Following the couples, the eldest villager came to the stage. The day’s hero was only 3 years shy of a hundred. The presentation of the award, a faithfully Moldovan certificate (how they do love their certificates), was marred by Nature’s capriciousness. As the officials handed the elder his plaque, a light wind tickled an envelope to the ground, its contents fled – a monetary prize, unannounced but now apparent. The two men presenting the award ducked slowly, sheepishly, to retrieve the cash.

Following the ceremony, a troupe of traditional Gagauzian dancers eased toward the front of the stage, hand-in-hand, to captivate their crowd.

Standing and jigging behind the festival-goers, I noticed a familiar figure approaching from the left – the boy-friend, at it again, coming in like a heat-seeking missile. He pulled the shoulder-squeeze, and as I smiled through a cringe, our Spanish volunteer took notice. Spain and France descended, joined hands and pulled us into a circle for a turn to the Gagauzian beat. We danced, four nationalities in disco(rd). 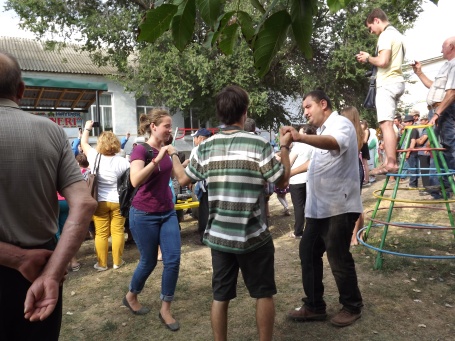 A few days after our adventure, I reviewed the day with my organizational partner, laughed about my experience with the Gaydar local – and so, the truth – he had interloped again! The same had happened when she visited the town earlier with the European volunteers – the heart, the love, the hand on the shoulder, the puppy-dog shadow. The boy-friend, a creature of habit. And me? No-one special. My heart broken, again.

Oh, but the rugs? Well, in the words of our French volunteer: http://miras.md/new/e/index.php?newsid=199 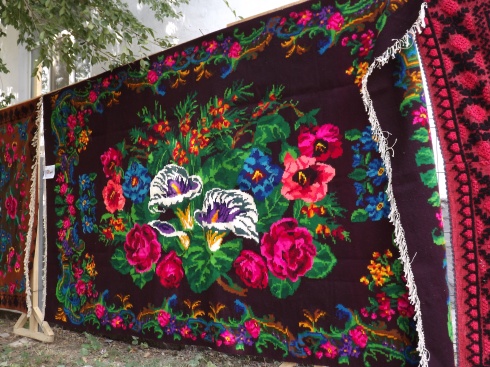 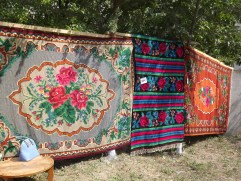 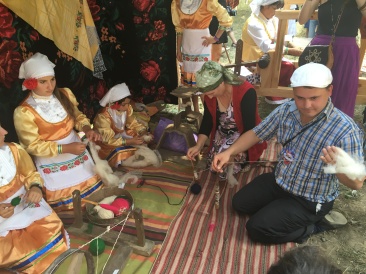 One thought on “A R(o)ug(h) Escapade”

Quite a while back now, I was invited to work on a project for a new artisanal chocolate bar company - @chocolateodyssey - that would result in the piece you see here. The painting is used for one iteration of the brand’s new packaging, and I’m so proud of how things turned out! Mostly because the chocolate is DELICIOUS. Happy my work could grace someone else’s masterpiece! You should check it out. Thanks Odyssey Chocolate for the gig ♥️ (Swipe right to see the packaging!) .
#badcat #dirtmonger #heartbreaker #badcats #badcatsofinstagram
Writing letters brings out some weird stuff ... #catlove #catsarecool #buttheybreakhearts #withtheirsharplittleteeth #catscatscats #catart
“Artists of the Soviet a period.” A portrait of Tamara de Lempicka, a vivacious Soviet artist know for her depictions of celebrities and naked women painted at the beginning of the 20th century. She was born to a wealthy family in the part of the Russian Empire that is now Poland and fled St. Petersburg in 1917 as the Bolsheviks came to power. She continued to paint in France and lived in a number of countries, including the US and Mexico. A wild and adventurous woman! .
Cheeks.
Sketching Tamara de Lempicka