I’m also conscious that it’s a worldwide problem, one that varies in severity and expression per culture, per ethnicity, per socio-economic status, per many other factors – but is still a human problem that must be addressed.

One of the most difficult aspects of my service in Moldova is adjusting to gendered norms and expectations. If I make it simply about me, I can complain about the differences in the way many men address me and how I observe them address my male friends; moan about the occasional catcall; lament the unwanted physical contact. Let my lady emotions, my female frustration get the best of me.

Really, what I experience isn’t that different from what I might expect back home. Oh yeah, I remember that guy who approached me at one of our local cafes a few months ago while I was sitting alone, studying Russian. Oh yeah, that guy who told me, at the beginning of our conversation, that he wanted to “see my figure” after asking why I dressed so modestly (apparently, a chunky white sweater is suspicious – “What, are you fat under there?”). You know, that guy who persistently asked for my number, who asserted that my (fictional) long distance boyfriend could “never be faithful,” who claimed to know how all women think, who insisted I would need someone so I could have my “needs met” while I’m in Comrat, and who finally insulted me when he realized my repeated “no’s” were serious.

But it’s not just me.

It’s par for the course, ladies – you’ve been there before. You know, that guy you’re sitting next to who just won’t leave you alone – the one who assumes you want it or that he can convince you that you want it, who assumes that “no” means “try harder,” who assumes he knows how you think, who can’t gracefully cope with rejection.

It’s the varied expectations for the women in my host country – what they can get out of life, and how they must behave.

It’s that anecdotal evidence from my female Comrat friends: it’s the Moldovan girls who focus on boys instead of school, who can’t overcome (or don’t want to, or don’t know that they can) the pressure to get married young, most often right out of high school, and have children immediately. 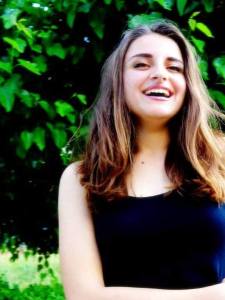 Anna Celak, 24: Anna is one of my partners at Miras Moldova and the EVS Mentor for European volunteers who assist the organization. Anna grew up in a village outside of Comrat, and wasn’t very active – she was a passive girl, didn’t participate in many activities, didn’t interact with many people, didn’t go out with friends. When she was younger, she was very responsible – since about age 14, when she entered high school, she stopped accepting money from her parents. She came to the Comrat Pedagogical School because her village did not offer classes from the 10th to the 12th grades. At the Pedagogical School, she studied for four years, mixing standard high school classes with a major of her choice – Pre-School Education.  She worked while she studied, selling cosmetics, distributing flyers and when she got to college, she studied hard to get a scholarship so she could be self-sustaining. Anna didn’t come out of her shell until she was 19 and entered Comrat State University. There, she discovered volunteering – something she had never before imagined – through a project for girls called “LeaderShe.” She joined the program and participated in different trainings – public speaking, project writing, table manners, etc. Specialists came from the capital and provided the trainings for free. There were motivational speakers – successful women of Moldova – who came to present for the girls. Anna listened to their stories, struggles, problems and victories, and the program changed her life. She realized that she had been seeking something, but didn’t know what. She realized through the program that she wanted to do something not just for herself, but also for her society. Since graduating university, Anna has volunteered with a local NGO to promote Gagauzian culture, volunteered as a mentor in Chisinau to girls with disabilities and involved herself fully as a mentor for Miras Moldova. Her most valuable experience with Miras so far has been participating in reporting projects with the volunteers, where she has been able to speak to incredible Moldovans with incredible stories, and learn more about her own culture in the process.

It’s the fact that even though we have a female Bashkan (president of Gagauzia), the women in the villages are still vulnerable – most of them don’t get a proper education, and many of them go abroad to work at 18 and continue this path for the majority of their lives. They’re housekeeping, they’re nannies, and they send money home. Most of the women who try to change their position in society, who attempt to demonstrate leadership or become key decision-makers, are in the capital. There’s a joke about the progressives, male and female, in the capital: “Chisinau will enter the European Union before the rest of Moldova.”

It’s the teenage boy (a hardworking and curious kid, one I respect for his perseverance) who told me I should stop smoking cigarettes because it’s bad for me. And his recommendation came with a social imperative: do you see cigarettes in the hands of Comrat women? No, they’ve got children in their hands. And the girls here do smoke, you know – but they hide. You see them circle around the side of my office building to take a drag, or huddle in the bathroom outside the town’s only “дискотека” – not to pee, but to smoke out of the public’s eye. They hide, while clumps of young guys standing directly outside of the club banter with cigarettes in hand. 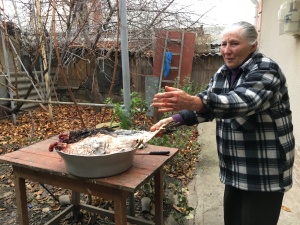 Nina Fyodorovna, 68: I met Nina Fyodorovna at my partner Nadya’s house, when I went with my Peace Corps friends to butcher a turkey before Thanksgiving. Nadya describes her grandmother as a woman with a strong personality, a problem-solver and a family leader. She’s a village girl, notoriously hard-working, and has lived what they consider the typical life – she married at 17 (common for Nina’s generation), had her first child at 18, worked hard, worked harder and continues to work. She’s been a nurse as long as Nadya can remember – her passion is healing. Nina Fyodorovna doesn’t just work in hospitals, either; she performs house-calls, and incorporates energy healing into her practice. For example, if Nadya feels sick, her grandmother knows just how to massage her scalp, chanting prayers under her breath, to clear Nadya’s head. She was like a second mother for Nadya – Nina Fyodorovna encouraged Nadya to study English, found her tutors when she was a child, and even checked her homework (though she didn’t understand a word!). During the 1990’s, the economic situation was extremely difficult for Moldovans – but Nina Fyodorovna persevered. She was the rock that held her family fast, and encouraged them to stay strong in the hard times. She worked harder than ever to support her family, bringing in the highest salary – and Nadya insists she’s the reason the family has a house now. She’s still the family accountant, she still works, and she cooks some badass traditional fare. More than anything, Nadya admires her integrity and her honesty.

It’s my conversation with an older woman I respect very much, who lectured me on a woman’s duty to her husband – who told me how, every day, she used to prepare food for her husband’s lunch break, as it was his duty as a man to support the household, and her duty as a woman to support him. It was her revelation that she never realized she could live alone, without a man’s support, until he died.

It’s the many times she’s told me that to have a child is a woman’s greatest joy, that her role in life is to love and support others, that she must bear children. A very narrow path – not moral imperative, I hope.

I’ve written about this before – how I respect my first host mother, so much, for all of the work that she does; for her multiple jobs, for raising her children while her husband works abroad, for cleaning the house and tending the animals and working in the garden and cooking every meal while still managing to balance all of her other responsibilities. (And this is common for Moldovan women, even those whose husbands live at home. They’re still expected to do the majority of house work – I wrote, in an earlier post (“My Home, My Host Mother”) about the regular work schedule of a Moldovan woman that we covered in one of our Peace Corps trainings. Who has time for herself if she’s on-the-go from 5 am until 11 pm?) 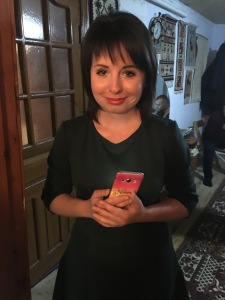 Nadya Guseinova, 28: Nadya is my primary partner and the Program Coordinator for Miras Moldova. She’s here to support volunteers, find new volunteers to help the organization, assist with grant proposals and generally help the newcomers adjust to Moldovan culture. Her interest in foreign cultures began when her grandmother first encouraged her to study English. As she explored the language in elementary school, she encountered her first Peace Corps volunteer, an open girl with a loud laugh and a head full of breads, unafraid of rain (she braved the mud in flip-flops). She motivated the kids with stickers, unheard of at that time in Moldova, and inspired Nadya to continue her studies. Nadya has a colorful work history – she spent time selling clothing in the Comrat bazaar, transitioned to teaching English in the local schools, and then began working with Miras Moldova two and a half years ago. One of her favorite memories was the time she helped two Spanish volunteers organize a trip to the zoo for Comrat youth with disabilities. She and the volunteers made an excellent team, where everyone pulled their weight – and the entire trip went according to plan. And Nadya has grown from her experience working with Miras. She can be a little shy, and doesn’t like talking to people she doesn’t know – but she had to get out of her comfort zone in order to help one of the Spanish volunteers with his reporting project. As a result, she’s become much more open to strangers. She’s also proud that she’s been able to open her family’s eyes to new experiences and cultures. At first, her family was against her work with Miras because of negative stereotypes of Europeans, but once they learned about what it means to volunteer, they changed their opinions of foreigners. Nadya has learned through her work that it’s not always a situation or experience that changes you – it’s the people who surround you.

Moldovan ladies, that’s what you can expect.

But seriously, ladies back home, you’re weak. Those things that bother you? Get over it, grow a thick skin, be strong and shut up about it. It’s not that bad. But don’t forget – if you don’t push to change things, if you don’t fight hard enough, if you don’t take every opportunity to speak up and always speak up at the right time for exactly the right reasons, it’s your fault that nothing changes.

Confusing, no? Welcome to the world of double standards and mixed messages.