“Why the animals? They’ve got the earth and the sky – everything they need!”*

*I’ll toss in a little context to this conversation. I was talking to my host mother about finding a grant to rebuild a monument in one of Comrat’s cemeteries. While explaining that many organizations are looking to fund projects addressing specific issues, such as youth camps, civil society, and animals… she jumped on me with the above comment. Anna very much values history. In her opinion, the legacy of the locals that would be preserved through the restoration of the monuments outweighs the needs of the local strays. And I’ve seen her sneak the wandering mutts scraps from our table.

My first canine friend in Moldova was bearish Tushka, the pet of my host family in Ruseshtii Noi. She was an outside girl, smelly but a sweetheart. When I first arrived, my host mother warned me not to give her a pet, but as an animal lover and former nightshift lackey in a no-kill dog shelter, I couldn’t help myself. The cutie, who is always chained in front of the house and is valued as a stranger siren, loves to play! Burpy dog kisses galore…

Tushka was always fed table scraps. From what I understand, this is common across Moldova – the mutts, and the scruffy cats (!) eat mostly people-food. And it’s no horror – they’re healthy beasts. My host mother feeds our cat Ser leftovers also.

Really, that spoiled suckler, Ambrosia’s pet, packing on weight before winter – Jabba Jabba, goes the barrel of his belly. The only near disaster was feeding him bones (which happens whenever we have meat in the house) one of those frosty nights (he had to keep the layers on somehow). My handsome French friend performed a near-surgery after noticing Ser scraping painfully at his mouth with his left paw, already covered in drool. The poor beast had a centimeter-long fragment of gristle and shard lodged in his feline wisdoms. And I digress.

You can buy dogfood at the supermarket or at the vet’s, but it’s really more common to give the mutts scraps. Only the fancy breeds, ones that families have invested in, get the “good stuff.”

In our second round of Peace Corps training, I heard a story from another PCV about the canines in her host’s home. One dog is a family member, treated with affection – but the other, merely a guard dog, and always confined to the outdoors. 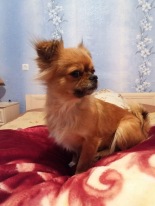 And then there was Lucky, my partner Nadya’s dog… and her cute puppy sandwiches! I must explain: like most dogs, Lucky eats table scraps – but it’s because she’s a picky beast, a spoiled creature with an attitude, and also with a grandmother who lovingly crafts crustless sammies from leftover bread and tasty morsels of meat (usually salami for the “lucky” darling).

So many dogs! A pack prowls regularly in front of my host mother’s house. It’s hard not to imagine their goings-ons as we stir, awake, after midnight. The mutts often bed down in a crumbling shed across the street from my host mother’s. The pack sometimes puts up a fuss in the middle of the night, most often on those warm evenings (but as I sit here, still chill weather, I hear two of them trumpeting curt growls down the long street of my neighborhood). I can never be sure about their disagreements, but I imagine the pretty little bitch on the corner may be somewhat of a temptress.

Though stray, I wouldn’t call (most of) the town dogs “wild.” I have one cute doggy friend, the leader of a pack (she’s obviously the alpha female, as her four followers can often be seen swarming around her, nipping at her heels, the short-legged one occasionally hopping up for a quick hump). We introduced ourselves at the corner near the police station a few months ago, and now, whenever we cross paths, she’ll at least greet me with a quick sniff and a wag.

My roommate and I have seen the “fence dog” on at least three occasions – a black pit bull-like beast, curious and a little skittish. She’s almost always in the yard diagonal to my host mother’s house. When we walk by the wall, she’ll bounce up quickly, yap a little and prance at head-level.

But the life of dogs is not always a cakewalk with tasty people-food and scritches. One of the country-wide problems is an overabundance of strays. During training, Peace Corps warned us about dogs that might bother us (or worse) while running. And yeah, I have some running buddies down by the local lake… I couldn’t help but admire a white wolf-like beast (from a distance). To address the issue, Peace Corps issues dog deterrents (batteries not included) to scare away any potential followers.

In a more sobering way, dogs may be an amusement. My Peace Corps friend Danny attended a dog fight outside of Gagauzia’s capital. They began the fights early, around 7 – because exposure to that afternoon summer heat would be inhumane.

“Sometimes they got bloody. That was especially visible against the white dogs. The trainers stand in the ring with the dogs and yell at them to keep going, or that they are doing well. One trainer nicknamed his dog Crocodile, which the crowd loved. If one of the dogs has clearly lost the fight or their life is in danger, a referee separates them using a wooden stick.”

The stray issue really is a problem in Comrat. Locals will tell you that dogs bite, bother and chase – and people often feel at unease walking alone in certain areas because of this. At best, they’re considered pests. In 2014, Comrat officials reported that almost 150 locals were attacked by these stray dogs (http://gagauzmedia.md/index.php?newsid=2106).

The local government has attempted to address these issues in the past. Although Comrat residents were divided on the issue, in 2011, a special team of 7 men were assigned to begin shooting the strays. Shooting would take place between one o’clock and six o’clock in the morning. In one night alone, over 40 dogs were shot in the center of the capital (http://gagauzinfo.md/index.php?newsid=1855). The practiced continued for several years, and in 2013, the society of hunters was tasked with shooting any stray animals from March 1 until March 31 to prevent the spread of disease (http://gagauzinfo.md/index.php?newsid=6922).

However, the Gagauz government ceased the practice in 2015, commenting that shooting the dogs still had not addressed the problem. They began discussing other alternatives, including building a shelter and mass sterilization (http://gagauzinfo.md/index.php?newsid=21166). Although Comrat’s Primeria (local government) has developed a plan to address the issue and allocated land to build a shelter, they have been unable to find funding for the project.  And unfortunately, though shooting the wild dogs has been banned, some locals have taken the issues into their own hands – and shoot the stray dogs themselves (http://gagauzinfo.md/index.php?newsid=26437).

The Comrat canines still have their earth and sky.

But there are other organizations in Moldova that support strays. I heard of an initiative in Chisinau that takes in dogs, “fixes” and tags them and then releases them back into the community… I saw a tagged fellow wandering around one day last summer during a lunch break.

If you’d like to take a look at one of Moldova’s shelters – “Fundatia Laika” – check it out on Facebook: https://www.facebook.com/fundatia.laika?fref=ts

One thought on “Crusty Canines”