I stepped into a hive, minus the keeper’s jacket, and the chirping female hum vibrating low in the high-vaulted space was momentarily overwhelming. I was surrounded by long-skirted blossoms, the falling petals of their scarfed crowns speaking respect to God. The scent of honey would come later, when the women lit their spindly candles; and the calming smoke, cloying smoke, when the pope pendulated his thurible.

It was Little Easter, or the Day of Remembrance. I first learned about the holiday after I attended a church service with my first host mother in my first Moldovan village (you can read about the service in my post Churches and Fainting Americans). I followed her to tour the cemetery afterwards, where she mentioned some holiday where families would gather at small tables next to headstones and share candy.

I sat down with my partner Anna yesterday to learn a little more about Little Easter.

Big Easter, like in other Christian faiths, is a day when worshipers gather to celebrate Jesus’s sacrifice, and his return – Христос Воскрес. However, for Little Easter, Orthodox Moldovans gather to honor the memory of family members who have passed. 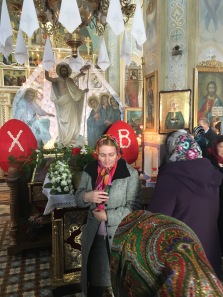 The day begins with a church service. People bring their Easter sweet bread, called пасхальный кулич, as well as a special sweet porridge (bulgur wheat with raisins and nuts) known as колива. The колива is a traditional religious dish necessary to send blessings to the dead at Little Easter. Other food includes dyed eggs, oil and wine in recycled “OM” bottles, local breads, nuts, assorted candies…

My Comrat host mother is a religious woman, and she invited me to attend the Monday service with her – or rather, to meet her at the church. She left at 6:30 to help set up tables in preparation for the ritual, and knows how dearly I value some shut-eye. I arrived at 8:00 to the buzz of gathered worshipers (mostly women, as is the standard for church services here) and began snapping photos of the crowded space. I smiled when one woman complimented a close-up I took of a food laden table.

Tables displaying Easter confections lined the inside perimeter of the vaulted room and curled around two large columns at the entrance. As I dodged around some of the shorter бабушки, I noticed women placing small notes, graced with a Moldovan lei or ten, on a table near the center of the room. The group stirred more restlessly when the pope appeared, and women began lighting candles carefully – honey-sweet – erected in the food in front of them. I snuck around a column to watch the pope at the head of the church briefly address his clergy. Then he and his assistant headed for the table with the notes and lei. 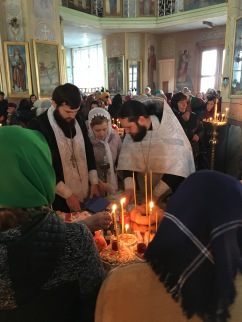 The pope conducted almost all of the morning’s prayers from that place. He began with a general devotion, and read from the handwritten appeals, a personal murmur nearly inaudible to the throng. The pope then rumbled a list of names – those of the dead – to send peace, and God’s forgiveness. The majority of the service was a rounded ritual, alternating between choral melodies, prayers, the censer swinging in the pope’s right hand, and the attendees touching forehead, breast, right shoulder and left with gathered forefinger, middle and thumb. 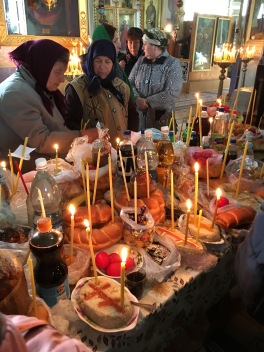 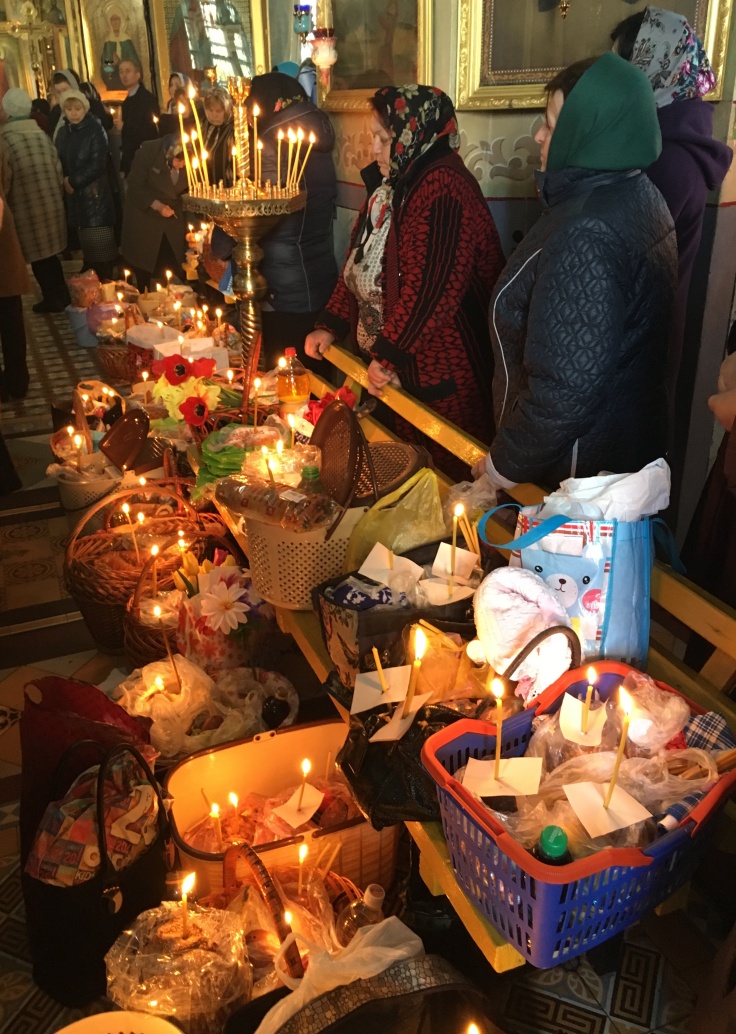 Twice, the pope circled the tables of food, swinging his incense, and oh, how fast the ladies scurried to get out of his path! And after his return to the center, he retrieved a small wooden cross, addressed us again, and the people gathered to lift the tables and jiggle them upwards, undulating the essence of the food to their ancestors.

The pope’s final blessing was more tangible. A young man followed him with a bucket, offering it to the pope as he dipped a brush and vigorously splashed the worshipers. 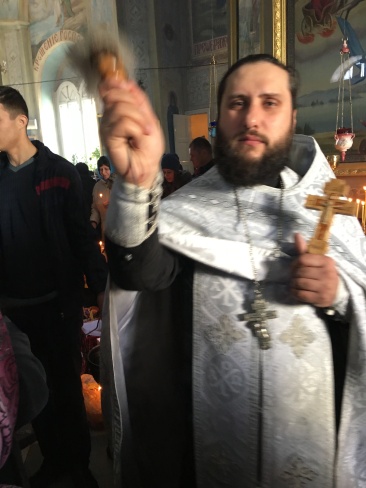 And then it was done. The clean-up was jarring after the formalities – women quickly stubbed out the half-melted candles, gathered their belongings, passed each other little baggies of plastic-packet-wrapped food and parted with a curt phrase, something along the lines of “бода прости” (this is phonetics, mind you), and according to my partner, roughly translated to “for the souls of the dead.” 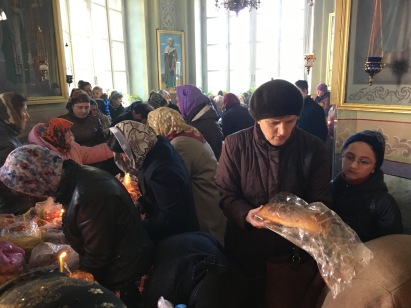 After the ceremony, families go to the local cemetery (or in some cases, cemeteries; Comrat has two) to the grave of one of their dead relatives – usually, the grave of the closest dead relative, like a mother or brother. They set up a table with the food blessed at church earlier that day. When a person dies in Moldova, families will often put a table next to the grave (the table is specifically designed for this day, a year-round ornament). Families gather together, eat, drink, make merry and share their food with the people nearby. 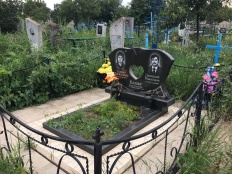 You’re not supposed to give the food to other people unless it’s been blessed at the church… But some people “cheat” a little. Anna laughed about her mother, who will sometimes skitter to her neighbor’s house if she wasn’t able to attend the Little Easter service. She takes a small spoonful of the колива porridge, rushes back home with it and mixes it into her own – a little blessing goes a long way!

But for some, Little Easter isn’t simply about paying tribute to their ancestors. Many women have begun to take it to an extreme, using it as an occasion to show off their brightest colors in a veritable fashion show. Anna told me of one woman, caught fast and featured online, dressed all in black and with white wings behind… and in 2016, a snarky individual presented Little Easter ladies in a mock “Miss Cemetery” contest.

I wonder who will win this year?

Check out the “Miss Cimitir” contestants here. Scroll down the page, and don’t forget to click right for more contestants!