This Thursday, my friend and I discussed the possibility of a life where human beings simply didn’t need to rely on a system of printed paper exchange (or even symbolic digital exchange) to coexist.

We began the conversation musing about the meaning of money. He argued for its extinction. I responded that, though I had long ago fantasized about it myself, I had come to value money as a neutral stand-in for time, or life-force. I appreciate that there is no weird system of bartering or labor exchange necessary for us to catch the latest Tarantino or sit down to a fancy sushi dinner. You know, like, I don’t have to clean the theater toilets for my Tarantino, or serve thirty perky customers per tasty sushi set.

It’s not like, for many of us, life-force is all we really have to exchange anyway. Or that certain expenditures of that force – though necessary expenditures, such as making a university student’s sandwich, housecleaning or non-specialized mechanics work – are somehow not as monetarily meritorious as, say, developing new anti-depressants or arguing for the increase of tariffs on solar panel imports to the US. Or that many don’t have much choice in how to expend that force for whatever multitude of possible reasons, and try to seek the job that will make them the most money (or make them any money at all), rather than a job they would enjoy and be invested in. Or that, per classist thinking and behavior, the majority’s time has less or no value compared with a special few. Or even that recent research has suggested that spending money on – gasp – free time makes for a happier, less-stressed life, which frees you up to focus on things that really matter. “Time is money!” she cackles.

What other system could there be?

My friend commented that, with today’s technology – and if we lived in a galaxy of flaming idealism like that of Jacque Fresco, where scientists formed a non-competing state and worked toward a few common goals until they were one-by-one conquered so these demigods could then pick up a new raging question, with social and economic stability (perhaps ditch the “growth”) and non-violent human interrelating in mind – our greatest knowers should be able to come up with production and systems and machinery that could make money obsolete.

But hasn’t money, in the capitalist system, spurred that technological advancement? Hasn’t it been the force that has raised the (US) standard of living, spurred innovation and raised the overall gross individual income over the last few centuries?*

Well, we are where we are, my friend said. And though capitalism may have been an economic evolution, evolution is not necessarily social “progress” – nor does it mean we must remain in this state. Let’s take the next step, he said.

He admitted – or perhaps, was delighted – that sacrifice would have to be made.** Yes, there would need to be conscientiousness and collective thinking. No, you would not get to zoom your Ferrari and over-consume fossil fuels while the rest of your “tribe” suffered your excesses. “Lux” would be out, and minimalism (not the flagrantly expensive aesthetic someone is – urp – selling to you) would be in.

Don’t take away my travel, please! I moaned. Cultural exchange is innovation, is broadening horizons, is room for understanding, is funsies and adventure and inspires new experimentation with tasty foods, is a way for us to crack open the head-boxes and let in the light!

Okay, he conceded – I’m sure there could be some sort of voucher system. For those who wanted to travel, there could be a social guarantee – everyone who desires it gets two weeks “abroad” a year. If we can figure an alternative to combustion…

We were pretending – pretending, I think, like the child who imagines she’s become the fireman she always hoped she would be. She explores the role, eager, thoughtful, intense. But she of course has no clue the implications of that dream, nor does she know the rock slides and switchbacks and mama bears inescapable along the climb. 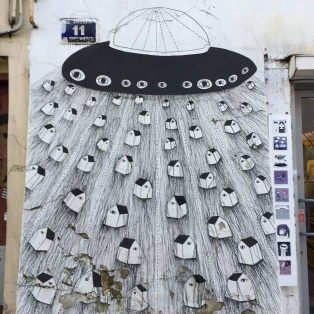 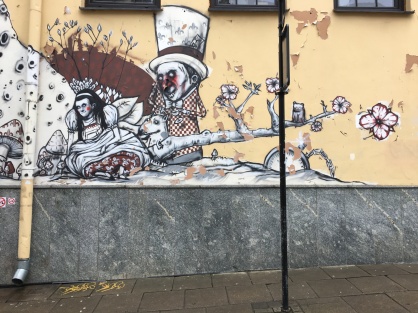 And what would it take for us to ascend?

And that bartering and exchange of services I had wanted to wiggle out of? I couldn’t imagine attempting it without some sort of government involvement (or, as some might endearingly spit, “handouts”). Because what can you provide an organization for energy, or heating, or reliably clean water? Or what can you value as you value your home? Would people be able to rate intellectual resources or specialized skills the same as basic necessities?

And how to participate in a global economy – enforce a new worldwide order of exchange or directly exchange essential resources with countries with different monetary (or non-monetary) systems? 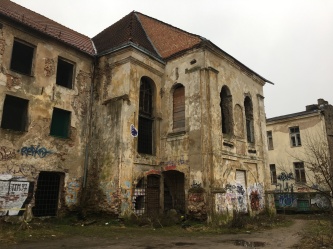 And what about how we think and relate?

All of these questions could only be answered if there were first a mentality shift. Human beings could coexist with every basic need met. They would need to adopt social responsibility, said my friend, but each person could exist with equally free time.

He had reminded me of one of psychologist Erich Fromm’s concepts.* Fromm identified and explained five (later 7) primary categories of human personality. Rather than passively waiting for one’s needs to be met, or violently taking what one desires, or dangerously clinging to and pulling more of what one has or, especially, selling oneself to the world, people could exist in a state where freedom and responsibility cohabit. Fromm called this the “productive orientation.” People in this category would pursue (or not pursue) their goals (or non-goals) from the core identities they had labored to create.

As I read it, both our pet ideal and Fromm’s monumental idea hinge on time. Fromm advocates for a society of humans that have learned to take responsibility while recognizing their individual natures, interrelating and self-actualizing – all of which necessitate personal time. This fantasy world of ours would give everyone equal state and space and time to just do (or think).

But my most pressing question, in this scenario, was addressing the longevity of those things we have come to value for their rarity, and their exclusivity.

How could we sustain creative pursuits – culture and art and music and poetry and film and photography and all sorts of other endeavors – those that we may consider leisure or frivolity, or have tried to repress for the social “threat” is has posed, or have over-consumed, depending on the context? Practices that historically flourished under wealthy benefactors or for powerful political and religious organizers, and now boast exclusive markets of their own?

In a society with no money, I asked, what value would “art” have? How could one take art from its originator, with nothing to exchange for something “worth that much?”

He said it simply: you give it away.

And I realized I was stuck, like Erich Fromm’s marketing man, on the idea that marketable means valuable (that people and time and life-force must be marketable), and that art must be marketed to be valued in society at large.

I remembered something: when I was a teenager, my best friend’s mother asked me to paint a dog (she was the manager of an animal shelter) for one of her friends. The friend had offered to pay well. Of course I agreed, because I took great joy in any form of artmaking. But I told her I wouldn’t accept payment. Just providing a gift for her friend was satisfying for me.

She laughed because naturally, I was being ridiculous. She reasoned with me. Take the money, and you can buy art supplies with it. And so I understood the relationship of money to art. What I had always given freely became something I could bargain away for floppy green denominations – I should bargain for floppy green schtropp.

That conversation with my dear friend shoved me back to who I had been, a version of myself that bowed in service to the dominant economic system of the west.

I remembered the worth of art without the cash. I remembered that it can be useful beyond its auction bid. Art serves both the creator and the viewer: it catalyzes cultural centrifuge, pulls smiles or sparks debate. Though it costs time, only those who are willing bend or bleed.

It’s a gift for a friend from a friend of a friend.

So, back to our original premise: a world designed with the knowers who know. Could we rally and give them a chance to get our financial affairs right? The result might be that, with labor mechanized, production in the hands of the people, food, shelter, healthcare and education provided and some hefty sentences of personal responsibility, all of us might have the chance to simply trade, or gift, the rest of our time.***

Here, I present a collection of one of my favorite art genres that pays testament to that idealist vision. Street art is often created with the motivation of community, enjoyment, and beautification in mind – and some of the better stuff is social commentary. Thankfully, it’s pretty hard to claim ownership of this work and enshrine it in some gold-filigreed cave.

My partner and I wanted to visit a train museum during our last trip to Warsaw. Unfortunately, it was closed when we arrived – the internet gave us no warning. I was sorely disappointed, but noticed a father and son (who, it looked like, had also wanted to visit the museum) get in their car and drive to the end of the train museum’s building – a long stretch away, in fact. We followed suit and discovered walls and walls of graffiti. You can see much of it here: 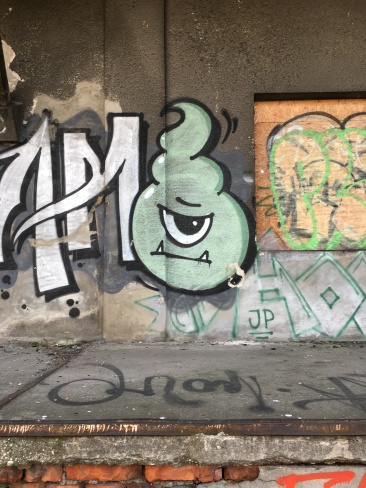 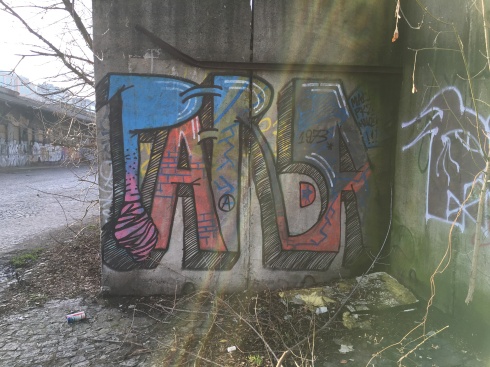 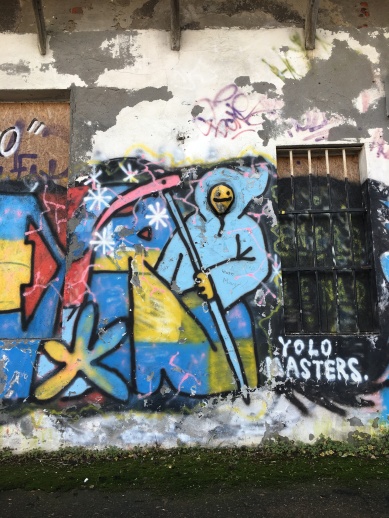 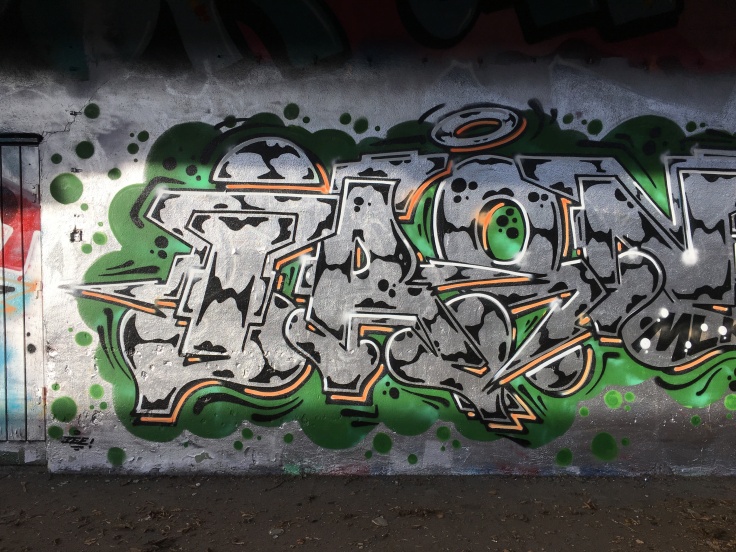 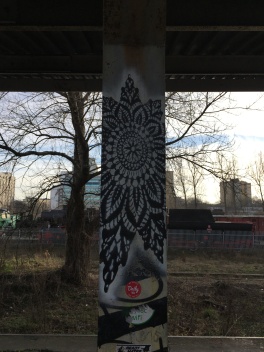 Graffiti was all over Warsaw and Krakow, actually: 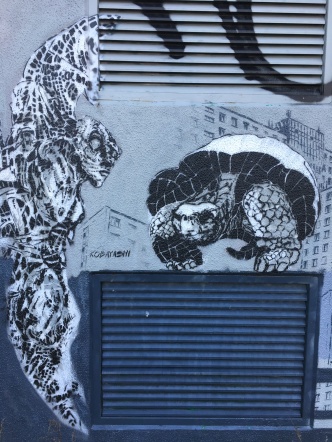 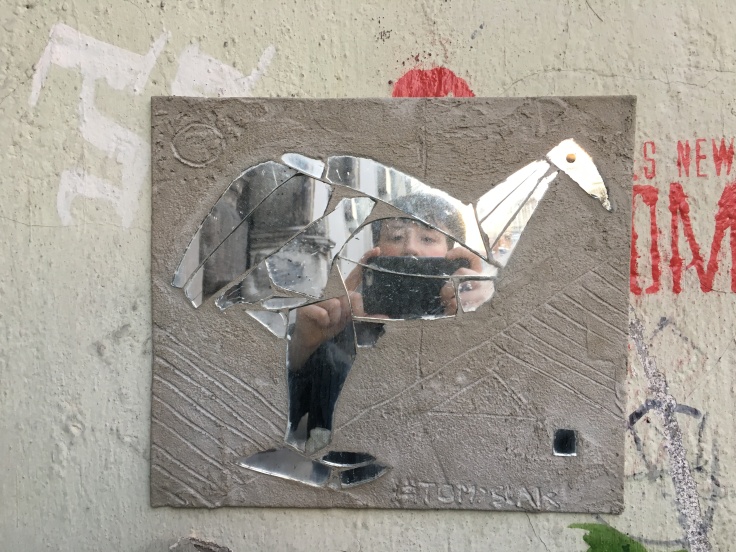 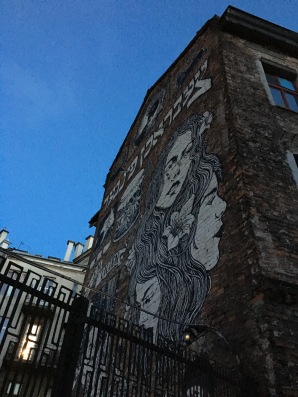 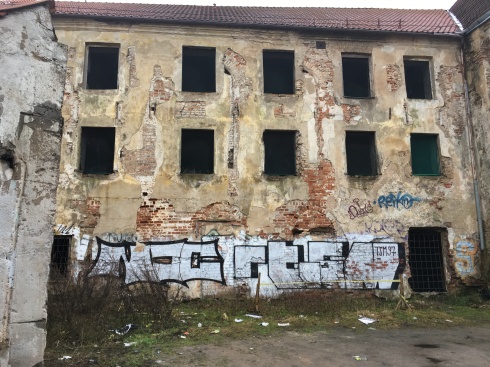 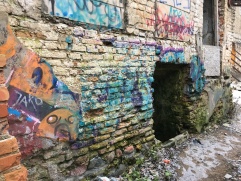 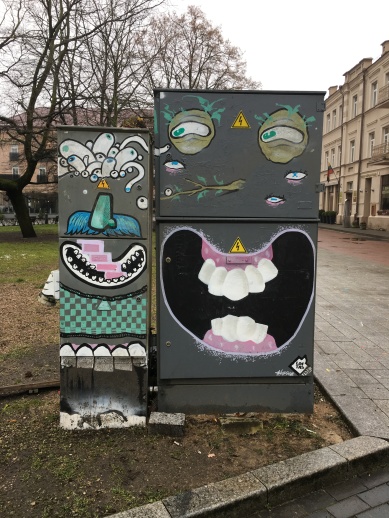 *My friend and I did not touch on the countries that may lose out as a result of profiteering economics.

**I was heartened, recently, to see reports of male movie stars and BBC presenters accepting pay cuts so their female coworkers could take the same salary home.

***For the sake of this post’s simplicity, I didn’t go too much into the specific effects of the poverty and labor practices encouraged in profit-driven economics. I would, however, hope that adopting a new system could relieve those people who are trapped financially. I offer a shameless feminist plug: women in abusive relationships, in the United States and outside, often remain in those relationships because they have no financial means to escape. Although getting rid of money wouldn’t necessarily eliminate domestic abuse, it would cause a shift in power that could let affected partners escape – or, perhaps more significantly, create the understanding that these power dynamics are unhealthy in the first place.

Quick, help, my cat is turning into a sardine! #badcat #badcatsclub #squishyface #trouble
Squishy, squishy, squishy… SQUISHY cats #squishycats #boxcats #boxkittens #catsundoubtedlyinabox
Animal takeovers! #badcows #badcats
Escaping the rain
I wrote and illustrated a thing! Check out my blog post “Alice by Another Name, And Nabokov, Too” on Russian Life… visit the link in my bio to read!
La Bohème #laboheme #labohème