Amiens is friend to no weatherman: her cloud breaks and spots of drizzle make for predictions no more successful than your telephone soothsayer’s. 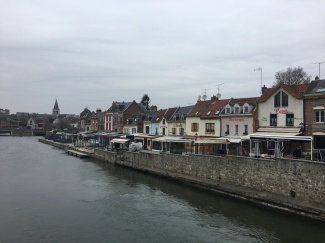 When visiting Limoges in late February, my friend told me about his mother’s gaffe when she moved there from Amiens. She would go everywhere with an umbrella wedged under her arm. Her first friends in the neighborhood gently teased: why, they asked, would she lug that thing with her on sunny days? It was a holdover habit from her youth, she admitted. One day in Amiens might have announced with a crisp morning sun, transitioned quickly to drizzle, breathed through a streak in the clouds and, finally, simpered into foggy evening.

She conceded to these stereotypes during my trip to her locality, singing clouds capricious.

There are streets on streets of reasonable homes. The vertically narrow buildings generally have two floors, a basement, a tiny garden and sometimes an attic. My friend told me they were built, long ago, for the working class during the French Industrial Revolution. The brick structures are classified as amiénoises. Now, the city is close enough to Paris – and idyllic enough – that the Parisian overflow is seeking homestead in newer Amiens. 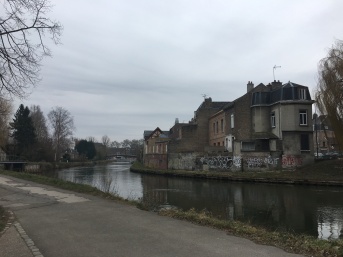 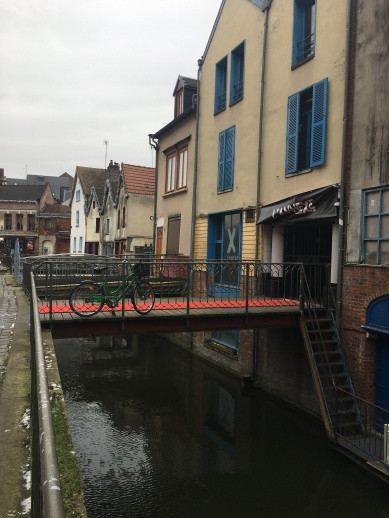 She is a cute town, with an old feel – but over the period of both World Wars, about 80 percent of the city was destroyed. According to my friend, this was not enemy bombing, but Allied bombing. American troops had ravaged the city with aerial and artillery onslaught to force out the Germans.

This devastation was not the only result of American war tourism. My friend’s grandmother was 16 at the time of the Second World War, and a young American soldier stalked her, seeking sexual favors (she was a lovely teenager by all accounts). The man followed her on the way to work and, lacking French abilities, forced her into a bear hug to express his passions. Apparently, many soldiers did the same across France; young women were often considered rewards for violent pursuit. American war propaganda insinuated that French women were lewd and lustful, and soldiers claimed entitlement to those women whose myth of sexual promiscuity promised venereal gratification.

Somehow, at 87 years, my friend’s grandmother did not express hatred for the Americans who saved her city. She did not categorize all American men as brutes – irrespective of the behavior of individual soldiers. Many others did. 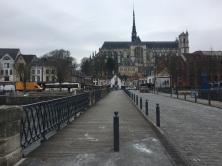 Today’s Amiens has overcome her oscillations to emerge as a young and attractive city. There is a college – the University of Picardy – with departments surging across the city. The campus educates approximately 26,000 students in all its faculties – a small city of nomadic youth. These young people tend to go home on weekends and on holidays. During this flight, Amiens a welcoming spot for a quiet vacation. 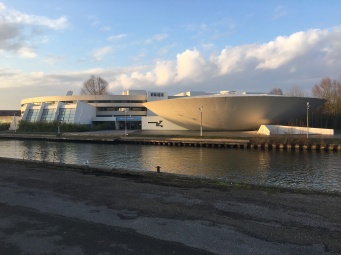 Bicycling around the city is ideal for seeing its many cultural sites, parks and gardens. Though it can be a snafu at traffic circles (where I would recommend biking the crosswalks), the local drivers are accustomed to bicyclists. My friend and I rode around the city on our old-fashioned Amstels, chains caged in plastic carapace.

Amiens is called the “Venice of the North” for her hodgepodge of green-grass plots bordered in canals, boats and bridges. 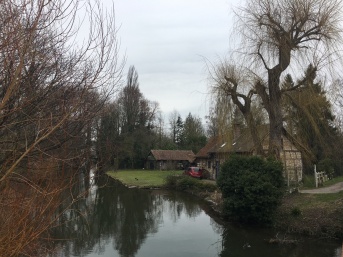 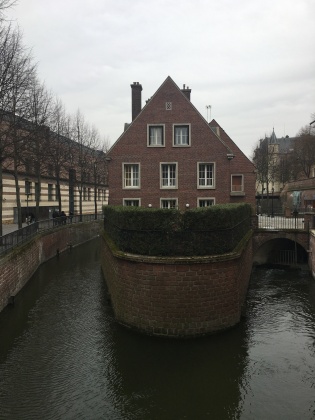 A significant part of this watery system, a stem of the River Somme, is the Hortillonnages. Once a massive swamp, the French developed hectares of land around Amiens for gardening. These days, the Hortillonnages are only accessible by boat for tourists, or by key for the private owners of the plots.

My friend, though appreciative of the effort needed to tend to these gardens, lightly scoffed at the boat trips to view the lawns (he took one himself late last summer to understand the fuss). It was a lesson in discomfort. He imagined himself in the role of voyeur, and questioned why one would pay to infringe on these private landscapes. Only a feeling of intrusion, he conceded later. But the gardens aren’t so useful, either! Just paltry flower beds and well-tended grass, pretty for a casual viewer… 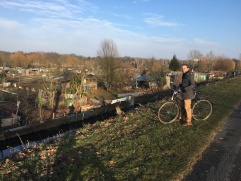 The city is home to other cultivated natural wonders. The Zoo d’Amiens attracts young families – and also the occasional nostalgic couple. This animal-lover couldn’t resist a tour. 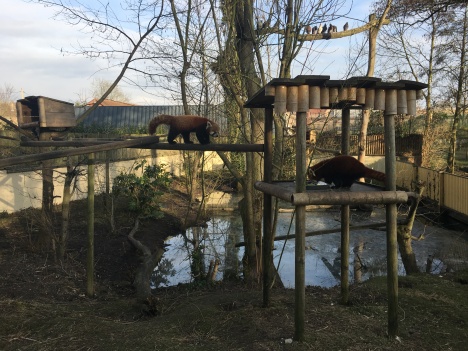 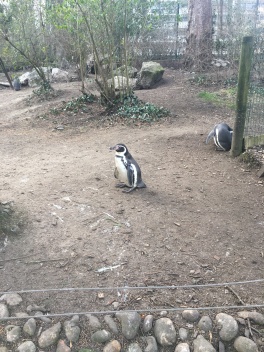 But the Zoo d’Amiens impressed for its commitment to its residents. My partner and I decided to attend a seal presentation that afternoon. The presenter insisted that the demonstration was no show, but a “presentation.” My partner commented that this was likely a result of scandals surrounding animal abuses in zoos and circuses.

We watched on while the two lady-trainers introduced us to a young breeding male, two females (the 18-year-old girl-seal was finally ready for pups), and a massive bull male. The performance included exercises that demonstrated how seals would prepare for visits from the doctor (a veterinarian is no friend to the seals, commented the presenter), behaviors for dental checks, shots and ultrasounds for pregnant females. The trainers were lively, professional and had a great deal of respect for the animals.

(Let me take a moment to mock the zoo’s particular pets. For those of you “at home” in the US and Canada – imagine the sight of a Canadian Goose in a French pen! Those aggressive, ridiculous birds make for a fair joke, landed in a place like that. They’re no more interesting than your kitchen’s dormouse, and they look like dinner.)

The Amiens architecture (beyond the amiénoises) is no less impressive than her animate occupants.

There is a massive cathedral gracing one of the city’s central squares – the Notre Dame d’Amiens. One of the largest in Europe, and the largest Gothic-style cathedral in France, she was fully constructed in about 70 years thanks to a lavish budget. This was unusual for cathedrals at that time. For perspective – it took almost 200 years to build the Notre Dame of Paris…

The cathedral of Amiens is home to many forms of art, ranging from an ostentatious grand organ, stone sculptures and icons to Bible stories carved in wooden relief. Its external walls also feature carved stone, little stories of our everyday struggles and fantasies. 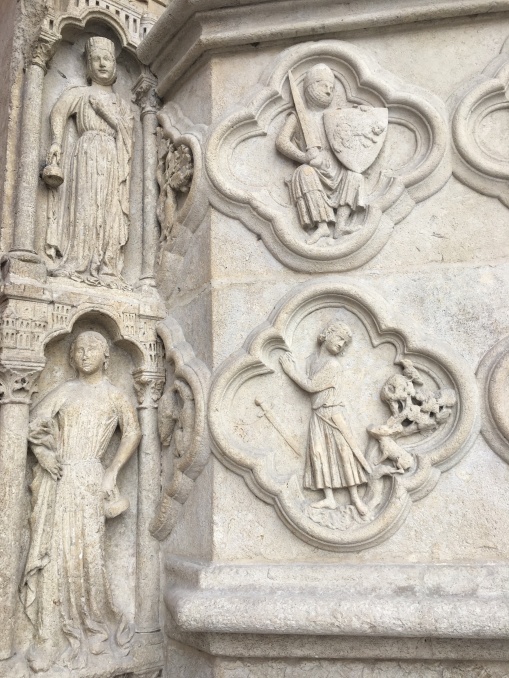 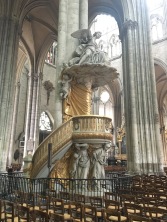 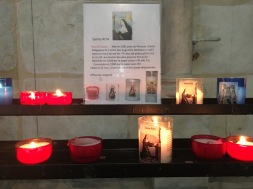 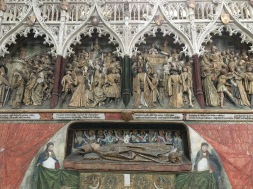 Another grand site is the Cirque Jules Vernes: opened in the late 1880s, the monument survived both World Wars with little damage beyond the loss of a side-hall. My partner and I went for a viewing, and our tour guide commented that the typically pragmatic French administration had chosen to build something practical (I had chuckled – sarcasm or no?). The culture there still thrives, with regular circus events, plays and concerts. 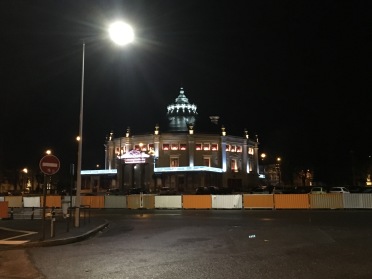 Chance had us unable to enter the building. My partner translated a conversation our guide had with another employee as she walked past our cold little tour group that day; apparently, the municipal government had forgotten to unlock the building for past tours as well. At 4 Euros per ticket, though, it wasn’t a complete waste – for those who speak French or have translators, at least. The circus is stunning building with real history.

But we ended up winning a demonstration, anyway.

As we had biked to our planned tour, the streets were clogged with police and stopped up at intersections. While we waited for our tour to begin, a parade of motorcyclists funneled through the streets, some revving and groaning, others blaring music. My partner later read that the demonstration was to protest a new French law limiting legal speeds for motorists. While I can imagine the new legal limit disgruntled the riders, they certainly looked like they were enjoying themselves during that ten-minute street-circuit.

And it would be a fantastic blunder to neglect a tip-of-the-hat to the typical French luxury. Supermarkets, even those styled like a Walmart, provide superior food products. While resting in Paris, a friend – Elise – and I pondered the development of French gastronomic merchandise.

While we rested in her Paris apartment, Elise briefly explained her take on the French Industrial Revolution. If compared to the burst of development in the US, “it simply didn’t happen” in France. The country did not have the same economic indicators, the necessary resources, and was largely agricultural.

At the forefront of her industrial development, trade regulation limited French economic development, where “markets were split up by local regions, which often imposed tolls and tariffs on goods traded among them.” It wasn’t until 1789 that the government abolished tariffs, challenged the guild system and opened borders for freer trade. Other obstacles to industrialization included war, lack of resources and less entrepreneurial values. Nevertheless, under those previous restrictions, French localities had already begun to develop specialties. These goods would eventually come to define their markets, and throughout France, region is still essential when naming and marketing a product.

So Elise and I thought this might explain today’s French artisanal savoir-faire – distinct knowledge needed to yield specific products, whether cheese, porcelain or wines. Though an English-language application of the term generally implies having the savvy and know-how to act, particularly in social situations, the French may use the term to denote a special knowledge of handicraft. The savoir-faire of the French often lies in the crafting of those regional specialties, and is perhaps best exemplified in the example of the “Champagne” controversy;  the only true champagne comes from the Champagne region of France.

Every trip to a middling supermarket means beautiful cheese. I rolled my eyes when my friend claimed those cheeses were “low quality.” In comparison to the American cheddar (a joke to some French) and Kraft, a standard cheese aisle (behind those standard glass refrigerator doors!) looks like what would be an artisanal paradise in the US.

So I’ll end on this savory note, bowing in gratitude to French dedication to hand-crafting excellent products. In my view, this defines French culture, and is especially apparent in Amiens: her charm lies in what she has built with an eye to the aesthetic.

It’s unfair to feature a place without celebrating her street artists. Here it is – a sampling of some of the Amiens graffiti and street-decoration! 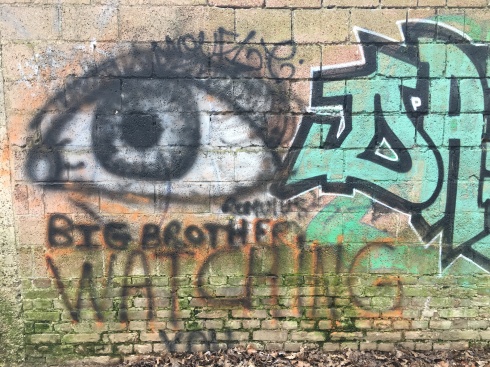 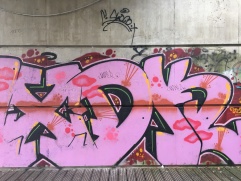 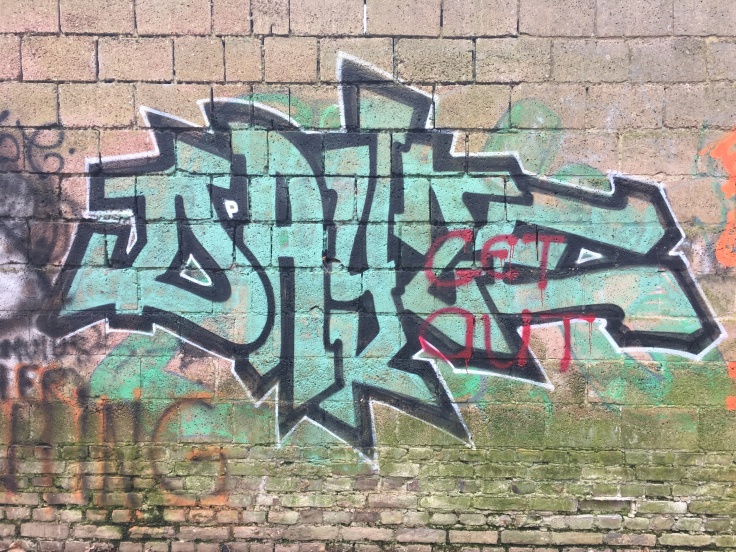 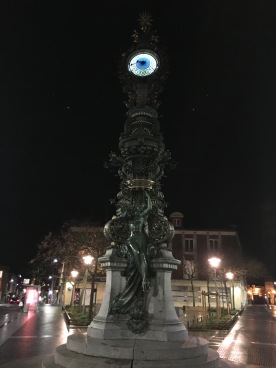 One thought on “Ambling in Amiens, The “Venice” of France”