Out in the crested hills, we find little bands of lizards. They’re a cunning lot – twisting, wiggling when facing the predator. The trick to catching them is to predict: they are running in the direction of their holes.

My lizard with the severed tail

My friend and I went lizard-catching in the slopes west of Comrat some time ago. His family has a field out there where his father is growing grapes, surrounded by wheat and weeds and bordered in orchard. Before the Soviet collapse, the government provided families with these fields. They don’t do this anymore. There might not be enough land for everyone to have a hectare, but I imagine it’s about profit. A woman in a different Moldovan village claimed the local government there gifts parcels to new families. But in Comrat, owners or officials can sell fields like they sell grave plots. The government screws up sometimes. A friend’s grandmother died, and the day after her burial, the plot’s “owner” resurrected, demanding his land. Another friend conjectured: the officials in charge likely hadn’t heard from that original buyer in years, so to line a few more pockets, they went ahead and sold it to another. 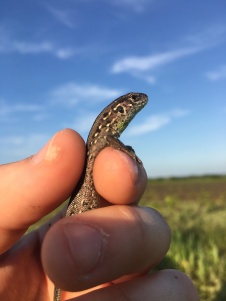 As we walked up past the new cemetery in the hills, the earth began exposing her shadow. It had been dry for days and huge welting cracks spanned the fields. Some were shallow, others deep fissures. I thought about the bounty of that earth. The land had so much potential to receive, but could only wait in stolid dependency for the rain. Unlike other hills or tampered hovels, this land could not fill herself. She was dull from human tending.

Our deal had been to give it five minutes: if we saw a lizard within five minutes, we would stay to hunt. Before we had walked around for two minutes, just at the beginning of the field, we saw a skittering flash of color. Many more reptiles would come after the first.

Humans had been working recently in the neighboring fields, cultivating shallower vegetables and spring grasses. The lizards, knowing the hazards of this territory, would await the first hand-tilling, or perhaps the vibrations of the first mini-buses bringing the season’s first laborers. These early disturbances would send them humming to safer spaces, like the field of my friend’s family.

The vineyard was covered in Lilliputian forests of weeds and strange grasses. The vegetation would rattle as you pulled your legs past – the sound mostly from a plant of thin dry stems growing tiny, very dry flower bells. These little bells would make a whishing, scratching noise whenever anything disturbed them. It was also a warning. When we worried a lizard in the weeds, there would be a slight swish of its presence. This was a great way to find them, but if the reptile careened into the taller grasses, she would likely get away. The earth’s cracks made great for lizard escape, too. It was easier to catch the lizards that fled from the bare patches of earth. It was always visual: a start on the ground of something dirt-colored, or fluorescent green.

We got brown with varying patterns, and occasionally with bright green stomachs. The most interesting was the sandy-backed little dragon whose scutes faded to a light aquamarine. My friend thinks that the lizards change colors. When we pulled them from the earth, they were mid-change, shocked into indecisive hue.

My friend was almost as fun to watch as the green lizards. After a period of discouragement, I sat in the middle of Lilliputia where I could gaze toward the home I’d soon be leaving.

I’d try to focus on the rippling awns, stems bending in shallow valleys where the wind traced. But I’d get bored, or sad, and look for my friend. It was as if I sensed the right moments, because each time I peeked he was engaged with his prey. He would crouch, still, until he needed to twist out from a Sumo’s sharp jerking stance. 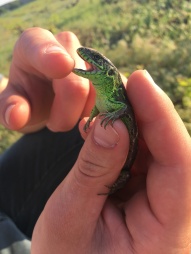 His trick was a patient crouch and then a truncated leap. He had been practicing lizard-catching as long as he could remember coming out to work with his father. Earlier that day, he had insisted of the hunt: “It’s a skill.”

In all, we managed to take four. The first three lizards were my friend’s, and mine came by chance after his good advice: I saw it shuttle almost two feet away from me, and I moved less erratically, trying to predict the thing’s trajectory. I snagged him after three or four dips. Mine was snappier than the others had been, since it likely wasn’t his first experience being hunted: we could see the split where he had lost his tail before.

After releasing my prey, we quietly and mutually decided to turn back, although we hadn’t managed to catch a green lizard.