The summer months are movement. My French colleague Rachel, who volunteers at our local rehabilitative center “Fidanjik” 3 days a week, had been fundraising for an excursion for her “babies” – and, now that the sticky weather permits, her outdoor projects are taking off.

I attended the event with Rachel, the Spanish volunteer Pilar and my partner (and newly inducted Program Coordinator!) Anna.

We split up to gather the families the morning of May 31 – some youth, who are too old to attend the center’s weekly activities, live in neighboring villages; others have chairs. I left my host mother’s house with Pilar to grab one young man in walking distance. His exuberance! Anna had called his family the day prior (he lives with his brother, his grandmother and his white-haired, garbled-Russian aunt) and told him we would arrive at 8:30; he called Anna at 7:00 to say he was ready.

We left late anyway. He was the last stop for the rented маршрутка, and we had no way of really predicting its arrival.

When we arrived at his gate (“Бабушка!” I yelled, as always), he was raring in his chair, parked center in his home’s concrete landing. We greeted, grabbed his bag, rolled him up through the gate and out to the pockmarked road.

As we knocked across the cobblestone, we passed a neighbor’s open garage – the men, working on a car suspended, greeted our charge. Hey! Did I hear “девушки”? It’s a joke with some of the boys at the rehabilitative center – they love the pretty European girls who come to work with them! And it seems to amuse the adult men at times, too. Always, there’s a little cheek – I was sitting with one family, once, and two youth from the center (we were visiting, playing board games with kids and holiday visitors), and one of the men switched to Gagauz and mentioned something to the boys – who curdled with laughter. “Девушки?” I wondered, as I pondered the language switch (vocal and body) and the reaction of the boys. Later, I took another question from the fellow as confirmation – “Can we contact you girls through your friend?” – our “friend” being of the boys.

Wheels scrambled, and I would kick the chair to cross potholes or navigate the half-sidewalks to the end of the road. Our charge enjoyed the struggle – it was a sled-dog-race adventure, and I didn’t dump him.

When we arrived at the main road, three blocks of Moldovan “street” later, we were forced to wait. We made camp at the sidewalk, greeted frequently by the inquisitive glances of passerby (is it naughty to admit I somewhat relished the circumstance? Two young women and a wheelchair-bound young man, laughing in the middle of the sidewalk, non-conscientiously, forcing the work- and school-bound walkers to reroute?).

We waited, the bus was late. And then, a private маршрутка lurched up next to us. There was a curious creature peering out the side, and she rolled the window laboriously for the quick chance to ask our chair-bound friend – “What are you doing on the side of the road?”

And just that exchange, complimented by smile and wave, was enough.

Before my Peace Corps service, I had never worked with individuals in wheelchairs. Only my post-operation grandmother fit this bill, and it was no struggle wheeling her around paved Suburban streets for fresh air. But in Comrat, and in many (if not most) Moldovan villages, the roads are moon landscapes, and pushing anyone in this way is a stop-and-start affair. We go slow to avoid the pitfalls, rearrange ourselves for cars and crumbled sidewalks; the pace is slow, and a staircase is always a group affair. A former French volunteer visited Comrat last summer, and he commented on how the town has improved wheelchair accessibility monumentally since his service 4 years ago. There were no ramps in the parks or many of the government buildings – but now, in the Center, many of the paths are smooth.

The bus arrived. As we skidded across the road to meet our transportation, I recalled the advice of my other partner – “After our trip to the zoo, I understood that you should take the kids in the wheelchairs first. It’s easier…” But the European девушки had saved a seat in the front, and the driver lifted our charge up into position. As he stowed the chair in the back, one of the women cajoled – “Isn’t it better to move him back, to the other seat? He’s sliding there…” And so I picked him up (20 years old, but likely no more than 100 pounds) and moved him to another spot with a handle he could grasp.

It was a strange feeling that bubbled that moment. It was pride, and accomplishment – I had taken this young man, by myself, to his space; and I had showed the others I could – me, a strong woman (Moldova has made it automatic for me – I celebrate female displays of strength). And it was affection for this youth – I had spent many times with him before; in fact, he was the second youth I met from Fidanjik, and here I was, helping him get to a new adventure (and as my dear French friend would affront as he read through the sentimentality, “BlArghh!!”). 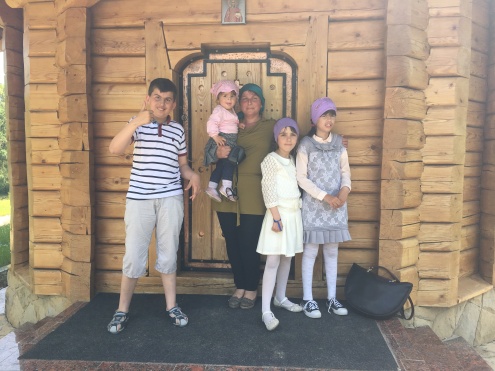 We rode for two hours, and when we arrived, there was a small hitch – we hadn’t organized our tour! So we went to search for a nun, who recommended that we go to see the holy fountain. We followed the path to a long flight of stairs, where we slowly maneuvered the wheelchairs and families. We made it, over pitted mud mountains, and splashed the heat from our faces. 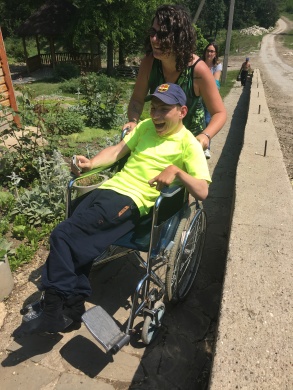 During the lunch hour, we realized that no one would unlock the door of a small chapel, so my partner and I – again – when to locate a possible guide. It was the monastery lunch hour too, and the women gather in family fashion, so we had to sit until a young sister finished eating and could open the small chapel for a short history lesson.

And then we followed the nun out of the chapel and back up the hill. My partner suggested questions for the sister – and oh, her beautiful lilting British-accented English! It was some of the best English I’ve heard from a Moldovan. She told me of the life, the work at the monastery. All sisters study, and take their jobs very seriously – “You must study every day to perform your assigned job well.” This sister worked in the kitchen, and sometimes the library. For their communal studies, they focus on music and religion. The monastery provides some music lessons for local youth, who must travel out of their way (it’s remote) to get there. There’s also a library with beautiful archives – although it’s only really accessed by the sisters there.

The nun seemed to be sneaking away, but Pilar asked her another question – and solicited a short interview for her reporting project. She asked about love, and superstitions. Pilar will post the results later…

And the sister continued to accompany us. She suggested a brief tour of the cathedral. Upon arrival we had noticed it was under construction – and were afraid we couldn’t tour. But she gained permission, and led us there. And I would say (beyond observing the stunning paintings inside) that the trip into the vaulted building was the day’s apex. We were faced with a forbidding flight of stairs, and had three youth in wheelchairs. One mother sized up the situation, and suggestion it might be too steep – but, after a chaired man’s request to head up, she shrugged with a “why not?” Following her lead (a small woman but strong, and experienced – she moves her son, heavier than the other wheelchair-bound youth, around like Rosie must have Riveted), we maneuvered the chairs up the stairs backward (four ladies per chair) – and we all made it. Every last person made it inside. 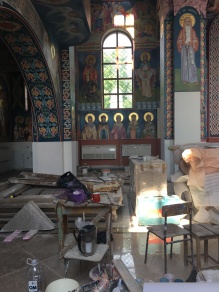 Some of us sat in the shade to rest after the cathedral – did I mention the crooked heat that day? Cool with the shade, and parental in the sun. I learned about one of the youth, maybe early twenties, who is too old now to attend the rehabilitative center. His grandmother told my partner his story – that he was a normal baby, the doctors said, but too large. For a successful delivery, his mother would need a Caesarian Section. And for the Section, money. The grandmother stated, they couldn’t get the money to the doctors in time – and, as is practice in so many organizations, professions, small aspects of everyday interactions in this country – nothing gets done without money. The doctors refused to perform the operation (the grandmother stated, also, that she had the money but couldn’t arrive on time), and since the boy’s head was too big, he became stuck as the mother gave birth. And an infant’s head is so incredibly soft…

The sapping heat and physical exertion proved conqueror. On the way home, the organizers appeared more exhausted than the children, and most of us napped haphazardly. At one point, as my head bobbed back from free-fall, one of the kids laughed and pointed – “Here.” His sister had passed out next to me with her head in his lap. I smiled and refused the invitation for a more comfortable nap – I couldn’t crush the poor darling. 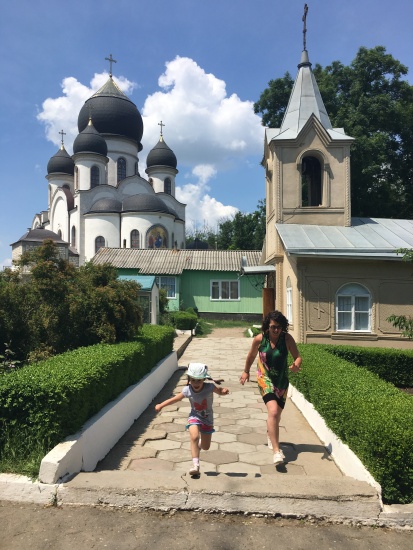 Welcome to Sundry Travels. My name is Haley, and I'm an avid jack-of-whatever-interests-me-at-the-moment. This site catalogs the culture, food, beauty and (mis)adventures that one can experience at home or abroad! You'll find a written and photographic record of current events, development activities and general shenanigans. If you like what you see, please share!